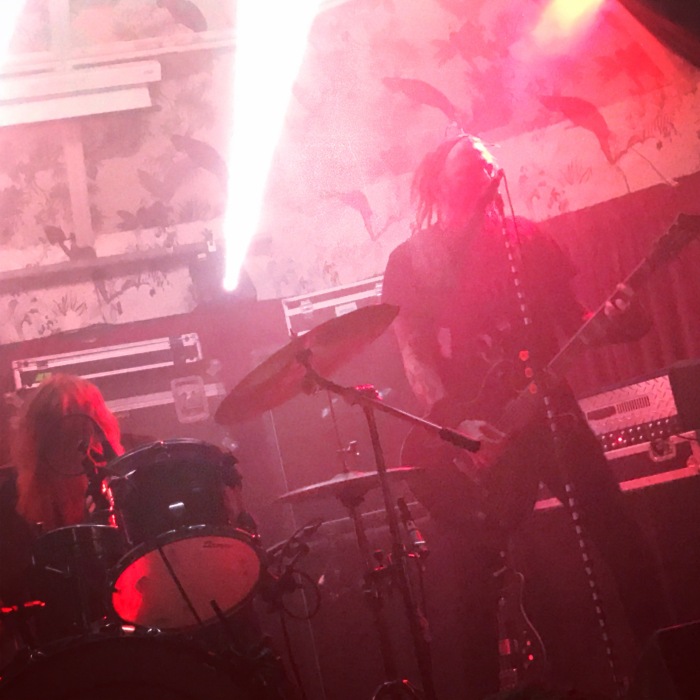 It takes a brave soul to venture out on the first Sunday after the clocks go back. Every instinct tells you to stay indoors, safe from the dark, the cold and the explosion of pre-emptive fireworks. Some may say it takes an even braver soul to leave the house to go and get pummelled by a band promising to make your ears bleed with their racket, but when it’s a trio as intriguing as Mutation, it’s one of those journeys that simply has to be made.

The calm before the storm at Manchester’s appropriately-named Deaf Institute comes tonight from The Empty Page. Recent winners of Indie Week UK, if you went solely off the band’s debut record, you’d maybe think they were a bit of a “lighter” choice to open up for the brutality of Mutation, but in the live arena the band are surprisingly heavy. Drummer Jim, for the first time front and centre, is an absolute beast behind the kit, keeping things tighter than Scrooge McDuck, while Kel and Giz seem even more animated than usual, putting extra effort into teasing out the power and emotion from songs like Deeply Unlovable and Wardrobe Malfunction. Always engaging and entertaining in equal measure, The Empty Page have been going from strength to strength in recent weeks and are hitting top form as their micro-tour of Canada approaches.

As Mutation prepare to unleash their cacophony, the crowd seem wary of getting too close to the stage for a few reasons: a) It’s pretty high b) the drumkit is precariously placed right at the very front of it and c) Mutation make so much noise they’d get a dead elephant bouncing. In three albums, Ginger Wildheart and his merry band of miscreants (live, this means Scott Lee Andrews of Exit_International on bass and longtime Ginger collaborator Denzel pounding the skins) have created a wall of discordance so dense and arrhythmic that it was certainly an eyebrow-raiser to see a tour announced.

How on Earth would three people recreate such a sonic maelstrom? Almost effortlessly is the answer to that. Openers Authenticity and Toxins from latest album Dark Black marry a Ministry-sized amount of bile with a strangely cathartic dose of euphoria while Friday Night Drugs and Carrion Blue throw that little Endless Nameless hook at you repeatedly until you nibble.

Arguably the star of the show is Vennart/Young Legionnaire drummer Denzel. Acting as ringleader, his position front of stage makes perfect sense, nodding at both Ginger and Scott to ensure they’re ready for the next onslaught before each and every song. As soon as he brings the guitarists in he transforms into a furious animal, pounding his kit so ferociously that cymbals start to escape from him, only to be brought back under control as white noise washes over us in between each song. Closing on an absolutely punishing Deterioration, there is a suitable finality to proceedings – no encore, no banter, we’re left with just the darkness and our ringing ears.

It’s certainly a divisive sound (interestingly there are only single figures of women in tonight; quite unlike your average Wildhearts-related show), but Mutation really gives Ginger an outlet to experiment and try new things even after 30-odd years in the business. For fans new, old, or of something else entirely, this is an absolute beast of a show that really has to be seen to be believed.