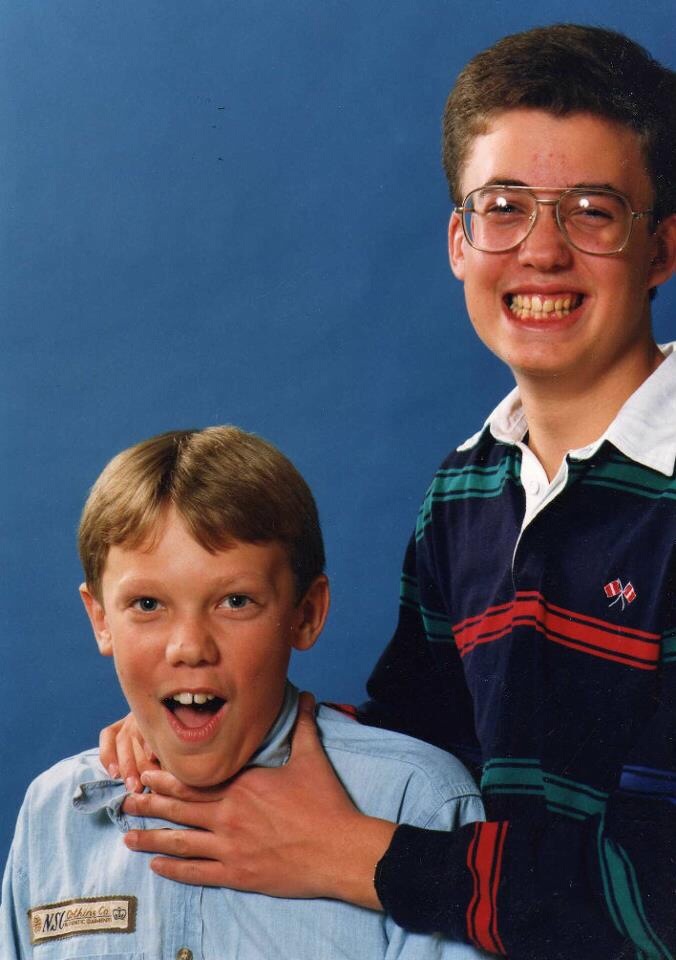 As of now, there are only four people left on this planet, still in my life, who I’ve known personally since birth. I lost the fifth this week and I will probably never fully understand why.

I am of course referring to my brother, Paul, who so suddenly passed away at only 38. I’ve lost count of how many things I’ve written over the years but this is the hardest piece and one I wish I didn’t have to write.

Growing up we were very close. Our shared allergy to the summer (or hay fever as it’s more commonly known) meant a lot of time together rattling through Final Fantasy books and hammering away at Dizzy or Horace on the Spectrum 48k. When we did make it outside, his sporting prowess (he won’t mind me revealing), wasn’t the best, but he still took great delight in kicking footballs in the general direction of my nether regions, admittedly with often quite accurate results.

Our play often took the form of TV show re-enactments, most frequently helped by a cardboard box TARDIS as I became the Adric to Paul’s fifth Doctor. We actually met Peter Davison at the opening of a Nailsea housing estate I believe when we were only five and eight years old respectively, neither of us realising quite how far that passion for Time Lords would eventually take him. But more of that later…

When you’ve got an older sibling it’s like having an extra parent. Paul ‘bought’ me (my parents may admittedly have funded it) a big fluffy cat that sat between my pillow and bedside table, pretty much from my birth, always there to protect me from banging my head on the wooden furniture. Little did he know that wouldn’t be the only time he looked out for me, whether it was finding me work experience or simply spoiling me rotten each Christmas, Paul always took great pleasure in my own happiness.

Of course, this didn’t stop him chasing me on holiday when I was about five and causing me to fling headlong into a chair, the scar from which still serves as a reminder today. Come to think of it, the one on my ankle from the see-saw incident has always been suspicious too… But I digress.

Did we fight? Of course we did, like any siblings who care about each other would. Whether it was playfully converting spring-loaded He-Man figures to fling mashed potato at one another over the dinner table whilst Mum’s back was turned or a more serious throttle here and there, my immaturity would wind Paul up just as some of his straight-laced attitude would me. But for every fight I always grudgingly knew he was right. Older and wiser, although obviously not as attractive (but he couldn’t hope to rain on my ENTIRE parade) Paul was always someone you’d want on your team in the battle of the intellectually superiors.

As an inspiration, I obviously had my parents there who both pulled out all the stops for the two of us, but I also had an older brother who would test-drive all those important life experiences for me. From hitting university to working in the big smoke, Paul did all the things that he could then handhold me through.

Over time I overtook him and not in a good way. I became the cynical one, always finding fault with modern society and the people within it. All the while Paul would retain the innocent joy that could be found in everything, from comics and radio shows to films and even an annual bag or three of Mini Eggs. He kept life pure, pulling the curtains on the badness out there in order to settle down with a board game and a Ribena.

Would I have gone down the journalistic route if it wasn’t for him? No. Would I be such a nerdy sci-fi and comic book guy if Paul hadn’t picked my Green Lantern comics up for me from Forever People and leant me his Target Dr Who novelisations to read? No. Would I be half the man I am today if Paul hadn’t been there? Of course I wouldn’t, because that’s what Paul always did; he saw the best in everyone and brought it out of them with patience, good humour and a childlike glint in his eye.

It’s these qualities which I’m so pleased others have seen in him as I read so, so many tributes to my big bro. His dedication, his passion, his enjoyment of life was so prevalent, he rarely let anything get him down. And of course, he always wanted to help others. Even as recently as last year whilst we were away on holiday at the Edinburgh Fringe, he’d still boot up his laptop each day to answer Big Finish customer queries because of his empathy towards others and his passion for the business.

Talking of the business, Paul’s career choice was a stroke of genius, combining hobby and salaried income in one fell swoop. Through the years of working with Visual Imagination and Big Finish he’d often message me a ‘look who I’m with’ picture of someone we’d grown up idolising on the telly together. He was so, so happy doing a job that he loved and I can only hope to find such gratification in what I do.

Paul got to meet his heroes and today I miss mine.